Alex Robinson grew up on a small farm in Southwest Virginia where he spent the majority of his summers raking hay, working tobacco, or chopping wood. The work never seemed to be completed, but it never really felt like work. Alex recalls, “From riding the four wheeler, throwing dirt clods, and drinking Pepsi on the back of the trailer, it was always fun!” It’s this work ethic and drive that has propelled Alex to where he is today, but no matter how late the day drags on or how stressful the situation, he always tries to have fun.

Alex carried this ideology through his college years at Virginia Tech and his initial stint at F&R. Alex – “The Dam Guy” – started with the company performing dam break inundation studies with a mixture of remedial design and construction management projects. However, his desire to grow and achieve more led him to The Queen City where he was challenged with managing and inspecting nine high-rise type structures over the last five years. From inspecting auger cast piles in the snow to watching baseball games from the top of 300 S. Tryon…er, we mean inspecting post-tensioned cables – it was a five year immersion course in materials testing. Throughout all of this Alex was able to become a licensed professional engineer in three states (Virginia, North Carolina, and South Carolina).

We were thrilled when we had a chance to snap Alex back into the F&R family. He takes a simple approach to management; lead by example and be responsive. 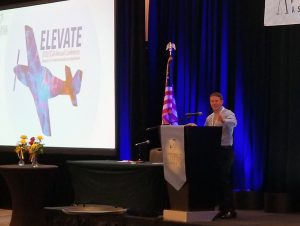 Alex extolling the virtues of F&R at the SC Aviation Association Conference.