Brendan Quirk’s attraction to geology stems from his enthusiasm for the outdoors and his fascination with natural history. He began his professional development studying at James Madison University where he gained experience identifying the characteristics and attributes of the different geologic environments and formations of the east coast. After achieving his Bachelor’s degree in geology, he continued his education at Virginia Tech, studying geotechnical engineering so as to better apply his knowledge to real world settings, as opposed to remaining in the realm of the purely academic.

Brendan has worked on projects located in all five of Virginia’s major geologic regions as well as Maryland and overlying dozens of unique geologic formations. He has produced reports of Subsurface Exploration and Geotechnical Engineering Analyses which provided information about the conditions of the particular sites and recommendations concerning geotechnical related aspects of the proposed construction. Brendan’s involvement with these project typically continues into the construction phase where additional geotechnical consultation is warranted and testing and inspection services are required.

Besides the emphasis on geotechnical work, Brendan has performed the role of F&R’s project manager for countless CMT projects which have included sizable projects such as academic buildings, apartment complexes, parking garages, and collegiate student housing. As a result of his exemplary work in the realm of construction materials testing, he was awarded F&R’s 2014 CMT professional of the year and since assuming the role of Branch Manager, he was recognized as Manager of the Year in 2018.

Brendan later relocated (again!)to the Richmond office to serve as F&R’s Director of Energy Client Services, a role in which he has demonstrated his client-focused approach to leadership.  In his latest role as Richmond Branch Manager, Brendan continues to serve as the Primary Account Manager for some of these key energy clients, while directing the efforts of the Richmond operation. 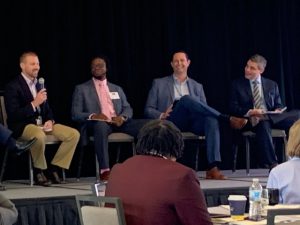 Brendan participating on a transmission case panel at the EPC Conference

A UNESCO World Heritage site designed by Thomas Jefferson…No pressure at all!